Trial Day Eight (or something like that) – Peace pilgrims sentenced 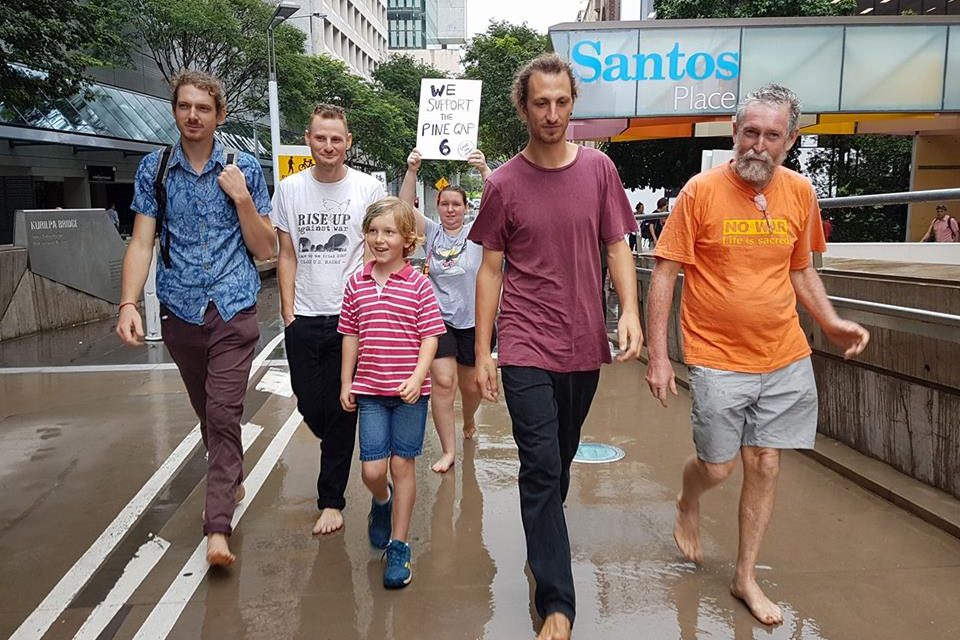 19 days since our court case began in Alice Springs, 356 days since Federal Attorney-General George Brandis authorised our prosecution under the Defence (Special Undertakings) Act, and 431 days since we walked onto Pine Gap carrying musical instruments on a chilly early morning; today the trial of the five peace pilgrims (as well as that of our friend and fellow pilgrim Paulie Christie) finally concluded.

It did feel a bit strange, after an intense couple of weeks in Alice Springs, to come back to Brisbane and our everyday routine with the court case still hanging in the air. But one advantage of being back was when we went to court this time it was with a room full of friends and supporters. Many of those friends we hadn’t seen since before we left. So it was a wonderful scene out the front of the court having everyone together.

Journalists asked how we felt about potentially going to jail. We felt a bit silly answering the question – all the indications from the trial were that most of us at least were unlikely to receive a prison sentence. We didn’t want to engage in hyperbole (there’s enough of that in the media without us adding to it), but I suppose the Brisbane journalists didn’t know what had gone on at Alice. And besides, in the long time since we’ve been charged we’ve definitely each had to grapple with that possibility.

The fly-in fly-out nature of Northern Territory justice meant this sentencing took place amongst a bizarre web of video link-ups. We were technically all meeting in the Alice Springs Supreme Court, though that courtroom was empty bar a few journalists in the gallery (friends in Alice did hold a solidarity vigil outside, which was much appreciated). The prosecutor appeared via a video screen from Darwin; Paulie and Margaret from the court in Cairns; while Justice Reeves and the other four of us were in Brisbane at the Federal Court.

So with all the screens linked up and a Brisbane courtroom packed full, the proceedings began. Justice Reeves amped up the suspense by talking first about the general sentencing principles he applied and all the legal technicalities. When it came time to eventually hand out the sentences, he would preface each one with a long description of our individual circumstances. First he sentenced Paulie – whose trial had ended before ours even began, leaving him hanging in suspense even longer. He was fined $2,000.

Then it moved on to us. The order he did (ascending in ages and criminal histories) indicated the sentences were likely to build up as he went. Franz and Tim were each fined $1,250; myself (for the dual charges of trespass and possessing a photographic device) $2,500. Margaret $3,500. Jim was the one we were worried might be imprisoned, given he has (in Justice Reeves’ count) 27 relevant criminal antecedents. But the judge said he didn’t feel jail time would do any good. Not for the seemingly sensible reasons that jail time rarely does anyone any good, or that Jim in his day-to-day life offers a lot to the world around him that would be missed with him locked up. No, Justice Reeves said he didn’t want Jim becoming a martyr to the cause and increasing the visibility of the protest. So he fined him $5,000 instead.

And that was it. We walked out of the courtroom to the sound of cheers, and once we were done signing paperwork we came outside to a group singing in the rain. The Lurkers’ classic protest anthem Padlock and Chain had been adapted to “who’s got a rattle and flowers?” in tribute to Paulie’s weapons of choice when walking on to the base.

It was definitely a joyous scene outside the court, but what were we celebrating? Was it just that we had stayed out of prison? Well that was a bit of  relief (it certainly wasn’t martyrdom we were after), and I think we deserve some credit for the outcome from the arguments we made through the court case. But as I told the assembled group before we went in, we wanted people to celebrate whatever the outcome was.

We were celebrating the act of resisting injustice in the face of feelings of hopelessness and the potential legal consequences. We were also celebrating the power of community. The little community of peace pilgrims who over the last 15 months have worked together to do the lament, the court case, construct a media campaign, and support each other mentally and spiritually. But also the broader community who were standing outside the court – people from different places with different histories and different abilities; who all work together in some way to build a better world. Some people on occasion trespass on spy bases, some contribute specialist skills, some offer friendship and support. At different times we can all play each of those different roles for one another. And today was just a great example that the lament had given an opportunity to come to life.

So after doing a press conference and milling around in the rain for a while, we headed home and put out an open invite for anyone else to join us. It was a fun afternoon there, hanging out and playing games directed by 8 year old Omar.

What happens now? Well we might get to relax a little bit after a busy last few months. Not being locked up means Tim can return to his homeland of New Zealand, and Jim can see his granddaughter when she takes the same journey in the opposite direction. The fines won’t worry us too much – having taken to heart Jesus’ instructions to give freely and not worry about what we will eat or wear; we mostly live lives unaffected by economic concerns.

Pine Gap has probably been in the news more in the last month through our action than it has in years, despite its omnipresent role in the wars Australia is involved in and in the mass surveillance of computers and phones across the planet. Hopefully our action can be part of a broader campaign to bring into the open what happens there and to challenge it. But that will take more than just a handful of scruffy peace pilgrims.

For us, our lives will mostly go on as per usual. Resisting injustice is a normal and important part of our lives, but doing so only rarely leads us in front of courts and TV cameras. As important as we believe those times to be, mostly it’s in everyday actions that go largely unnoticed. The challenge for us is to keep doing it the best we can using what we have. The invitation we hope to have offered during our brief time in the public spotlight is for people to join us in trying to do the same.