#ClosePineGap is an active campaign which is part of a web of anti-bases campaigns attempting to lessen the influence of the United States of America on Australian domestic, foreign and corporate policy.

In 2017, the focus of the campaign are the actions and trial of the #PineGapPilgrims who face 7 years in prison.

In 2016, six “Peace Pilgrims” were arrested lamenting war and praying for peace on the mountain and in the valley next to the secretive Pine Gap war-making facility near Alice Springs. The charges were at first thrown out of court and the protesters freed because of what Local Court Judge Daynor Trigg called a “nonsense” piece of legislation.  The law required direction from Attorney General George Brandis to arrest and lay charges. The six, have now been charged following explicit signed authority from Mr Brandis.

Jim Dowling, Andy Paine, Tim Webb and Franz Dowling of Brisbane, along with Margaret Pestorius and Paul Christie of Cairns, are each charged with ‘Unlawful Entry’ under the Defence (Special Undertakings) Act 1952 (Cth). They face seven years in prison for these acts of faith, prayer and healing.

The Statement of the #PineGapPilgrims

“Early on Thursday morning, September 29, five “peace pilgrims” walked near to the Pine Gap U.S. military base at Alice Springs, in Arrernte country, to lament the death caused by the base and to resist the violence that is perpetrated there. Two days later Paul Christie also walked near the war-making facility and spent several hours there in prayer and lament.

All six of us had travelled to Alice Springs to join people for the 50th Anniversary of the establishment  of Pine Gap. … From Vietnam to Syria, Pine Gap has played and continues to play an integral role in all US wars. Essentially Pine Gap is a huge intelligence gathering centre. It collects radio transmissions, thermal images, and cell phone messages via satellites. This information is used for targeting purposes, essential to conventional as well as drone warfare. It would also be essential for fighting a nuclear war. Its final role, if that day comes to pass, will be to be an integral part of nuclear annihilation.

For a week we had been lamenting war, including the frontier wars, at various sites in and near Alice springs. Finally, we felt called to enter the heart of the war machine itself.

Playing the viola and guitar, five of us climbed the hill nearest the Pine Gap domes. We reached the top of the hill and the eerie sight of dozens of bright domes and antennas stretched before us. We prayed and lamented.

We were arrested and charged with trespass under the Defence Special Undertakings Act. We face seven years jail for trespass.

Pauli Christie was  arrested and charged two days later crying and praying in the creekbed. We will continue resist the war crimes of Pine Gap through the court process and jail if necessary.”

Watch our video of lament and Donate 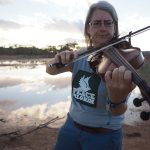 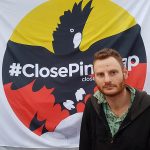 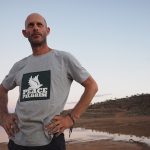 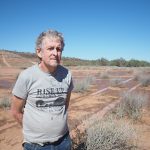 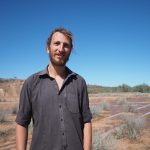 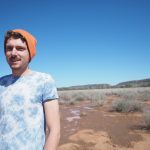