What is Pine Gap? 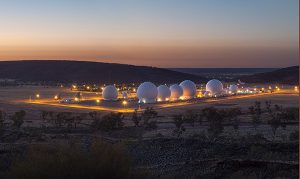 Pine Gap is a joint United States-Australia military spy base located on Arrernte country near Alice Springs, Northern Territory. Pine Gap is one of the most important U.S. military bases outside of America, used in both surveillance and military operations. Although much secrecy has surrounded the base, information about its purpose has slowly come to light through leaked documents and research.

Pine Gap was originally built during the cold war to collect information on the testing of Soviet missiles. Today surveillance and intelligence gathering is still the major function of the base, including the interception of cell phones and satellite communications. It is thought that the US controls all of its spy satellites from Pine Gap.

Pine Gap provides the data that enables the targeting of U.S. drone strikes in countries with which the U.S. is at war, including Pakistan, Yemen and Somalia. These drone bombings are known to kill many more civilians than the people originally targeted, including hundreds of children.

US military and intelligence operates overtly and covertly on many fronts globally. The Australian government is complicit in the deaths, injuries and displacement of many people through its involvement in US-led coalitions in war zones, and in the facilitation of execution-style drone strikes. The Australian Government has allowed the US military, along with its private war industry contractors, to embed in Australia, on land that was never ceded by the traditional custodians, with no consultation of the people of Australia.