Early on Thursday morning, five “peace pilgrims” walked on to the Pine Gap US military base at Alice Springs, in Arrernte country, to lament the death caused by the base and to resist the violence that is perpetrated there.

Jim Dowling, Margaret Pestorius, Andy Paine, Tim Webb and Franz Dowling were the pilgrims. Christians committed to non-violence, most of us had undertaken “peace pilgrimages” before on this and other military facilities.

We had already had several thwarted attempts at actions at Pine Gap this week, and this one involved a long late night walk through pretty tough country. When we eventually arrived at the perimeter fence we discovered police patrolling with spotlights. If we were going to get to the base it was going to be a race.

The actual Pine Gap facility is tucked away behind hills. With police at the top, our only hope of lamenting in eyesight of the base was to do it on the run. Musical instruments and a photo of an Iraqi father holding his dead child had been packed to aid the lament. They were unpacked halfway up the hill. Miraculously, the instruments were in tune. Playing guitar and viola while running up a mountain is not easy. Neither is filming the whole thing in the dark. Nevertheless, the feeling was there.

The musicians made it to the top of the hill performing their elegy. The cameraman was tackled by two cops and handcuffed. There in front of us sat Pine Gap – the place that spies on the world, identifying targets for bombs and drone strikes. The place that has been responsible for so much death. The place that is central to the myth of nuclear weapons being a “defence”. All around us, invisible satellite signals were being sent and received; part of the never-ending and all-encompassing War On Terror, aiding the reign of the world’s military superpower. Prayers were uttered. Tears were shed. The defiance in our hearts was strengthened. And then we were frisked, locked in police vans and transported out of there.

We were charged with trespass under the Defence (Special Undertakings) Act. The law exists specifically to protect Pine Gap and carries a maximum penalty of seven years imprisonment. Only one group of people have ever been charged with it before – the “Pine Gap Four”, who in 2005 entered the base to conduct a “citizen’s inspection”. One of the Four, Jim Dowling, was with us again this time.

In 2007, the Pine Gap Four had their charges overturned on appeal. The High Court ruled that to use the act, the government had to prove that Pine Gap was used for the defence of Australia. A subsequent law change means that is no longer the case – it is now written into the law that Pine Gap is a “defence facility”.

Another complication to the law arose though. For a charge of this magnitude, the expressed consent of the federal Attorney-General is required to charge someone. The prosecution admitted that Attorney-General George Brandis had not got back to them yet. They expected this meant the case would adjourned. Judge Daynor Trigg disagreed. The charges, he said, should be dismissed.

After much discussion in the cell of what we should do regarding bail conditions, to our surprise we were called into court to be told we could go free.

A big crowd of supporters at the court cheered, and we walked out to hugs and smiles. Another lament, this one stationary and free of police interruption, was performed. Our expectation though is that the charges will be re-laid shortly, and facing the serious penalties of this act in court will be very interesting and challenging.

A big thankyou to everybody who helped us in the action, and all who have supported and encouraged us. Let’s continue together to resist the war machine and create a more peaceful world. Close Pine Gap! 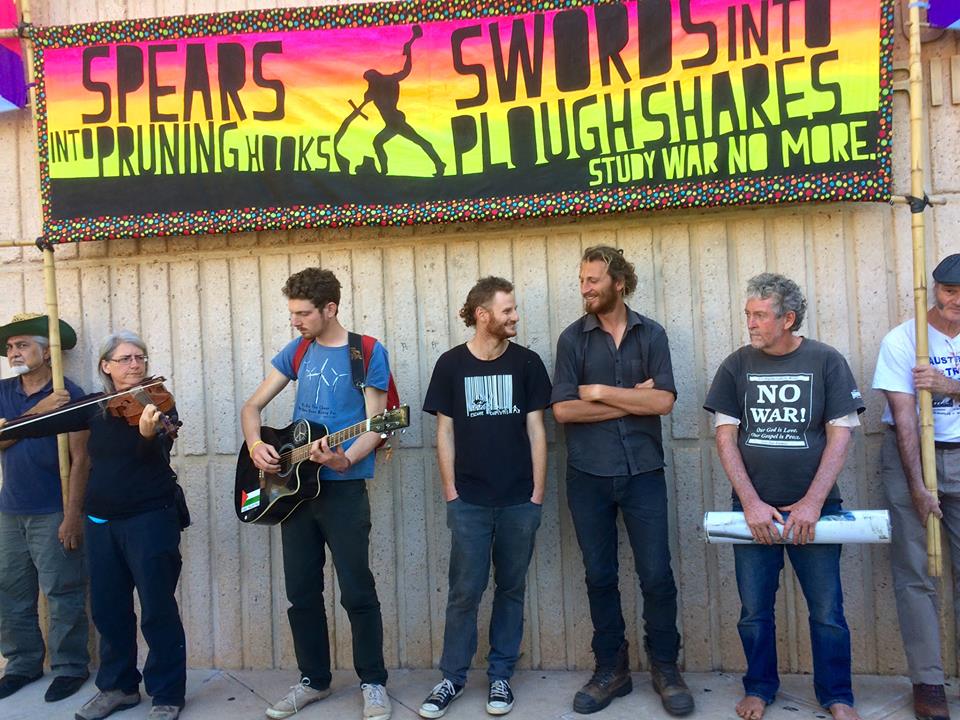