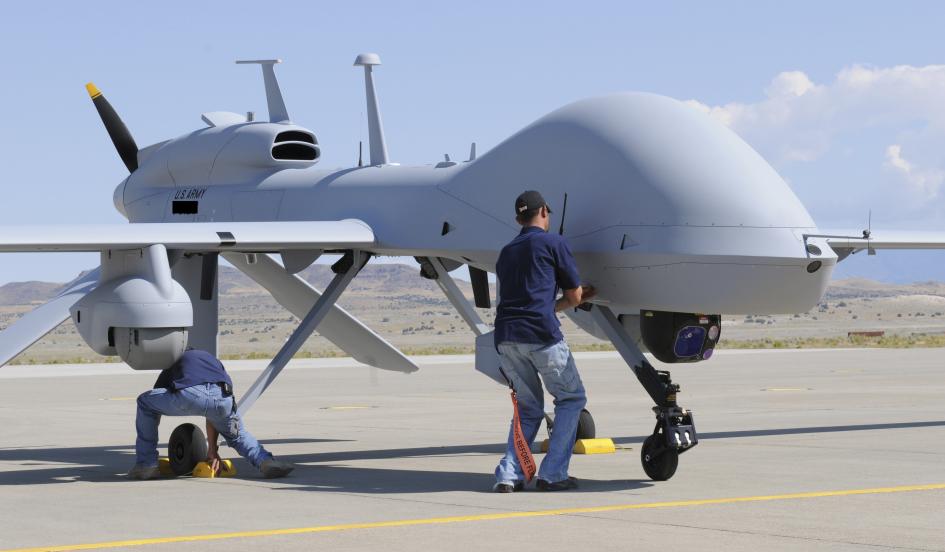 The need to close the drone warfare program at the Pine Gap Joint Facility near Alice Springs will be debated at the Independent and Peaceful Australia Network annual conference in Alice Springs next week.

Alex Edney-Browne, a researcher on drone warfare at the University of Melbourne, will be among those debating the issue at the Saturday, October 1 conference.

Ms Edney-Browne said the Australian public was not told about the alarming rates of civilian casualties from drone strikes and the psychological effects of living under drone surveillance and attack.

“There are numerous reports of men, women and children too afraid to sleep at night. In North and South Waziristan, in Pakistan, anxiety disorders have manifested into physical illnesses including headaches, heart attacks and suicides.

“Many children no longer attend school.  People avoid congregating socially in public out of concern about what the congregation could be mistaken for from above. Local communities have been depoliticised as they worry about attending local jirgas (community meetings), as jirgas have been ‘accidentally’ targeted in the past.

“Government and military spokespeople in the US and allied countries tell the public that drones are an ethical weapon – that drones stop civilians from being killed and limit the destructive effects of war. This is simply not the case.

“The use of drones allows the US and its allies to wage war in Pakistan, Yemen and Somalia, countries with which neither the US nor Australia are formally at war.  It couldn’t wage this proxy war with land forces: using drones therefore enables war rather than limits it, thereby increasing, not decreasing, destruction.

“The laser guided drone weapons only land within their target radius 50% of the time.  Amidst the hype about “surgical precision”, it’s easy to forget the obvious: missiles and bombs produce deadly blasts that endanger the lives of everyone in the vicinity. The kill radius of drone strikes can be up to 90 metres. Putting “warheads on foreheads”, as the US call it, is a practical impossibility no matter how technologically sophisticated drone warfare appears to be.

“Strikes often target the GPS signals of an individual’s mobile phone.  If that mobile phone changes hands, or someone borrows it when the person is targeted, the new holder of the mobile phone and the people nearby will be killed.

“Algorithms are created through monitoring people’s daily movements and are used to identify “suspicious” behaviour but these are an un-intelligent tool.  It doesn’t follow that because someone is walking a different route one day to buy their groceries, that they are going to meet with a terrorist group.”

Professor, Department of Policy Science and International Relations, Faculty of Law and Letters. University of the Ryukyus, Okinawa.

Beginning with the anti-offshore platform construction struggle in Henoko, Nago City, Professor Abe has been deeply committed to the protest movement against US military bases in Okinawa. She set up an affinity network “Project Disagree” with her friends to protest JP-US agreement in October 2005; she is struggling with continuous
non-violent direct actions by loosely connected people. Also Abe is one of the sit-inners of Takae, Higashi Village, where Japanese government has been forging ahead on construction of U.S. military helipads (i.e. Osprey pads) since July 2007.

Dr Natividad is an Associate Professor of Social Work at the University of Guam.  She is a native Chamoru who has research interests that include the impact of colonization and militarization on her people. Dr. Natividad is the President of the Guahan Coalition for Peace and Justice and has shared Guahan’s plight with militarization in countries all over the world and at the United Nations.

Dr Natividad is a core country representative and steering committee member of the International Network of Women Against Militarism and was the chairperson for organizing a meeting of the network on Guahan in 2009.  She is featured on two documentaries examining militarization on Guahan– Living Along the Fenceline (which was aired on NPR stations throughout the US) and an NHK documentary that was aired on NHK World.  She has published numerous articles on the militarization of Guahan and continues to be a voice elevating the concerns of her people.

Richard Tanter is Senior Research Associate, Nautilus Institute, and Professor in the School of Political and Social Studies at the University of Melbourne. Richard has worked on peace, security and environment issues in East and Southeast Asia as analyst, policy advocate and activist since the 1970s. His research has focused on militarisation and peace issues in Indonesia, Korea and Japan, as well as the wider politics of East and Southeast Asia

‘With world-renowned expert on Pine Gap Des Ball, Richard is completing a project on Pine Gap today, from which eight detailed papers have been published by the Nautilus Institute to date, with more come.

Co Deputy Leader of the Australian Greens and spokesperson on Foreign Affairs.

Senator Ludlam was first elected to the Australian Senate in 2007, and re-elected in 2014 and 2016.  He has served on numerous Senate Committees and holds the portfolios of Foreign Affairs; Defence and Veteran’s Affairs; International Aid and Development; Communications; Sustainable Cities; and Nuclear issues.

President Medical Association for the Prevention of War – Australia

Dr Beavis is committed to the abolition of nuclear weapons, and the end of the hazardous nuclear industry. Her concerns for the human costs of war have led her to work as a volunteer GP with Melbourne’s Asylum Seeker Resource Centre. She also has a particular interest in health and the environment, both on a global scale, and in her local community

Based in the USA, Ray Acheson is the Director of Reaching Critical Will, which is the disarmament programme of the Women’s International League for Peace and Freedom (WILPF). WILPF is the oldest women’s peace organisation in the world, founded in 1915. Reaching Critical Will leads WILPF’s international work to stigmatise and end war and violence, from banning nuclear weapons to challenging the arms trade. Ray monitors and analyses intergovernmental negotiations and discussions related to disarmament and arms control, does research, writing, and editing for WILPF’s publications on weapons-related issues, and represents WILPF in advocacy on disarmament.

In 2007, he, as a United Church of Christ in the Philippines (UCCP) pastor, was abducted by armed men at a memorial service for a friend who was assassinated in 2006. Heavily involved in social justice activities in the Philippines, Pastor Guerrero had caught the ire of corrupt officials looking to stamp out opposition, particularly from those critical of government and the ruling elite.  Mr Guerrero was held captive, and tortured, for 15 months before being released from trumped-up charges of sedition and murder.

Although he was officially free, his safety was not assured.  So, when he was offered sanctuary with the Uniting Church in Australia, he and his family made the difficult decision to live apart.  Mr Guerrero has since been reunited with his family in Australia.

Lee is the Australian Greens Senator for NSW.   In the early 1980s Lee was centrally involved in the Pine Gap Women’s Peace Camp to bring to public attention the secrecy of the US Base and Australia’s vulnerability as a nuclear target. She was keen to meet with members of the local Pine Gap Interest Group to share information and discuss possible activities around the 50 year anniversary of the signing of the Pine Gap treaty in December next year.

Russell, a long term Alice Springs resident and activist, was an organiser and participant in the 1987 Pine Gap protests. As one of the lawyers for the Pine Gap 4, he dissected the legal ins-and-outs of their case, in which their convictions by a jury on serious charges arising from their 2005 Pine Gap trespass were overturned on appeal.

Jo represents the WA People for Nuclear Disarmament on the committee of the Independent and Peaceful Australia Network. She will be MC for the IPAN Conference on Saturday 1st October.