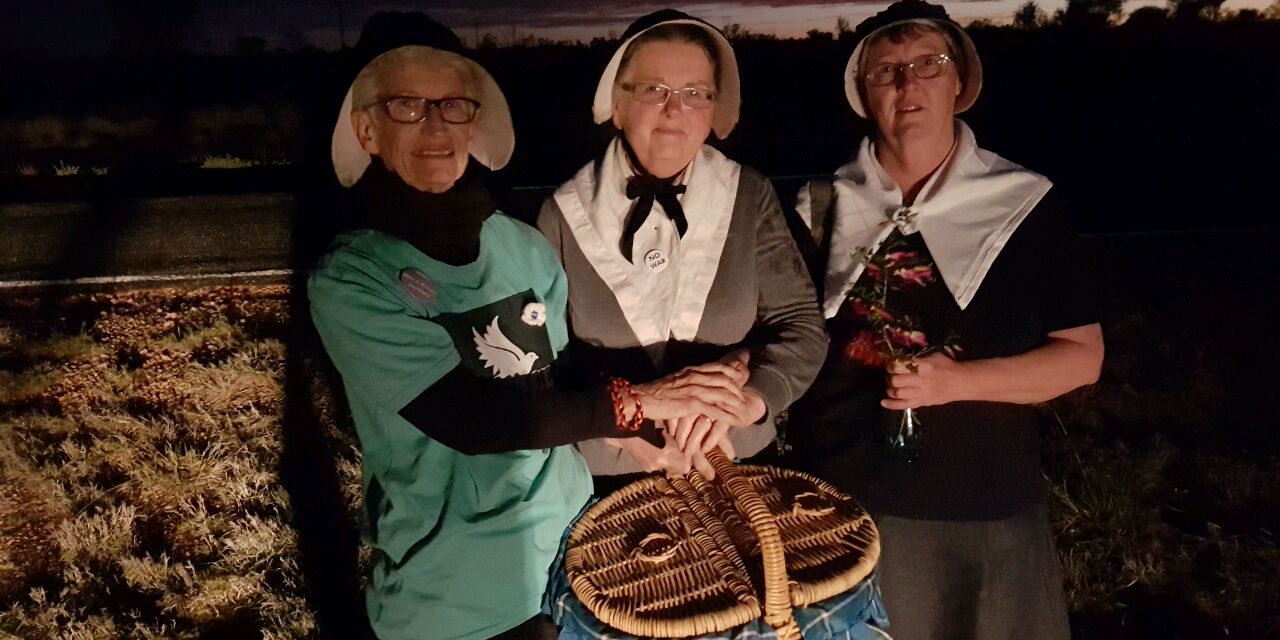 Three ‘Quaker Grannies for peace’ have set up breakfast on the road to Pine Gap and are inviting military personnel to sit down with them and negotiate.

The grandmothers have set up a table and chairs and prepared tea and croissants in order to engage in dialogue with personnel arriving for work at the base.

‘We are asking Australians whether it is appropriate for a foreign country to be operating a secret facility with no transparency on Australian soil; a base that may well be implicating Australians in wars that our government has not entered into’, says Helen Bayes, longtime Quaker, grandmother of thirteen and founder of the Quaker Grannies.

Pine Gap collects various kinds of data, mined from the Asia Pacific and the Middle East, which is used for drone strikes in nations where Australia is not meant to be at war.

‘Our Quaker peace testimony from 1661 says “We utterly deny all outward wars and strife and fighting with outward weapons for any end or under any pretence whatsoever”.’ says Bayes.

Grandmother of five, Dawn Joyce said “This is sovereign indigenous land yet the US claim that all their bases are US soil. I support the claim of the Arrernte people who did not agree to this base being placed on their sacred lands”.

The action is one of a series marking the 50th anniversary of the secret US military facility at Pine Gap. Groups are advocating that it is time for the base to be closed.

Last year the Grannies appeared at the entrance to a military training area at Shoalwater Bay, outside of Rockhampton, during the largest US/Australian joint military exercise in history. 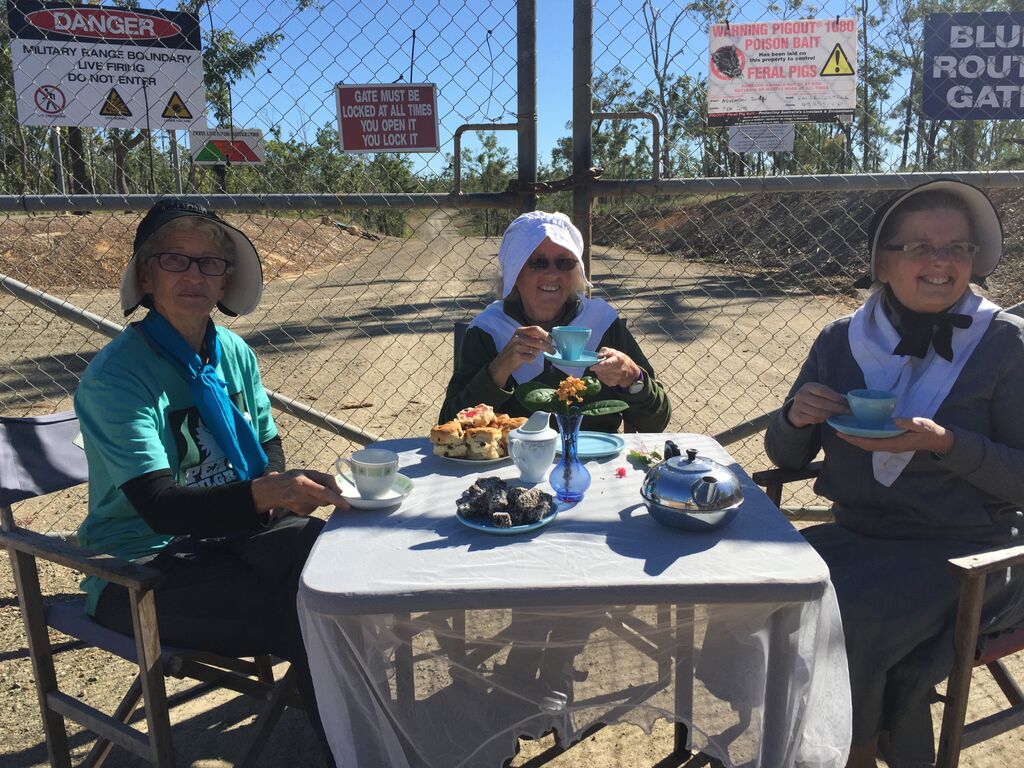 Professor Richard Tanter from the Nautilus Institute will be present in Alice Springs for the Independent and Peaceful Australian Network (IPAN) Conference (29 September to 2 October).

He points out that from China’s perspective, the US-Australian military alliance is likely to raise the supposition that “Australia is not so much hosting US military bases, but is becoming a virtual American base in its own right”.

Anti-militarism advocates at Pine Gap this week are not the only ones who have been trying to raise these concerns. Malcolm Fraser wrote a book not long before his death called Dangerous Allies, which argues that the time when it was in our strategic interest to have a strong military relationship with the US is over, and that now Australia would be better off with a more independent foreign policy.

Advocates are also amplifying calls from other groups, such as the Greens and Australians for War Powers Reform, that the decision to go to war must be debated in the Parliament, particularly in light of lessons from the recent Chilcot report.

A recent interview with quotes from Richard Tanter

Photos and Video will be available in this Google Drive 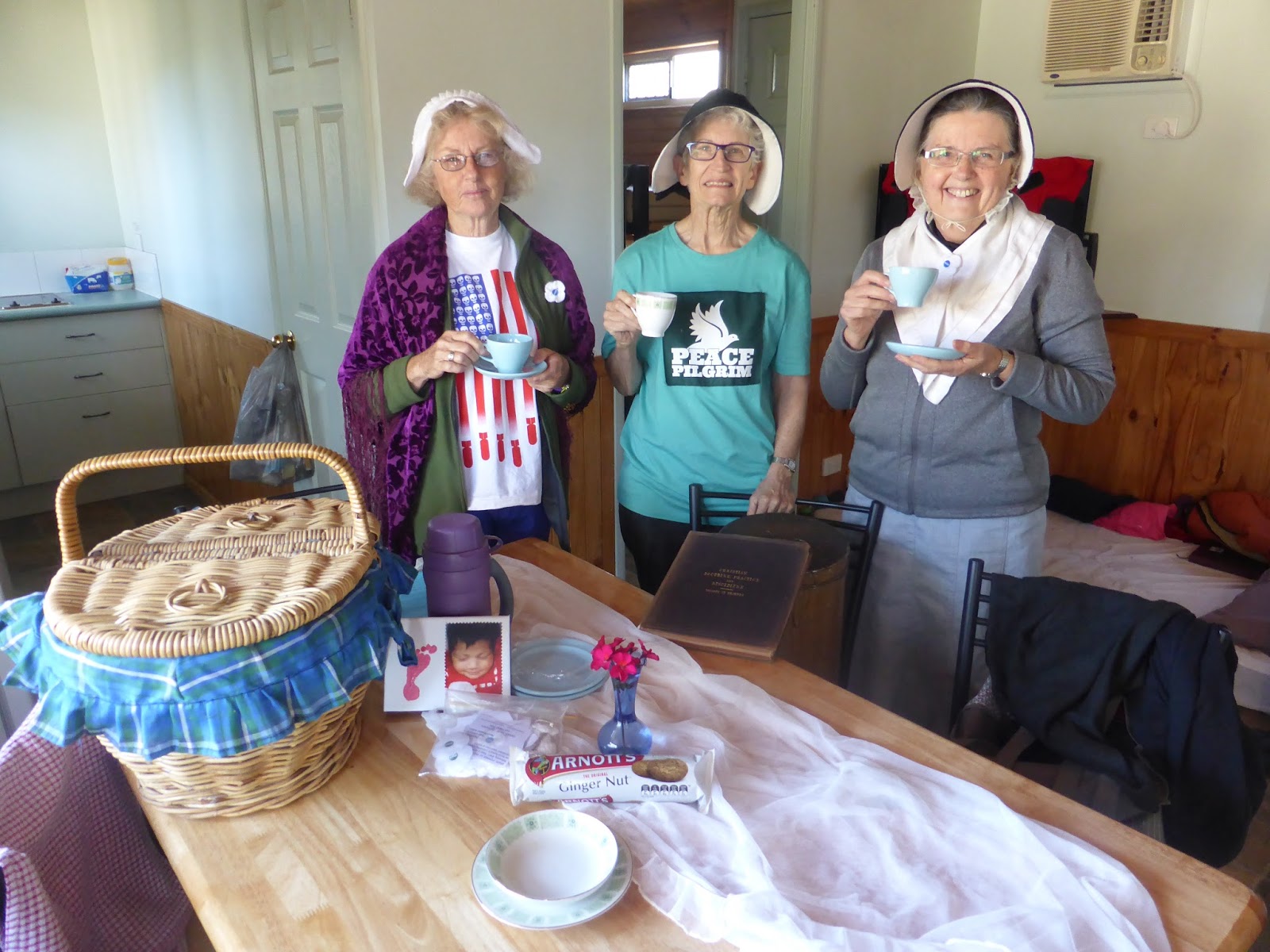 Background information on the Quaker Grannies for Peace: Transcript of Helen Bayes

Quakerism emerged in the UK in the 1650’s, which was really immediately after terrible civil war, which had caused such enormous suffering and death and environmental destruction. And the turbulence— political turbulence—and the threads towards really the monarchy, the government of England. Before that, the bible had been opened up by translation into English in the King James version so ordinary people who could read, could read the Bible. So people were reading the Bible, they were fascinated by the stories, you know, their own faith was illuminated by the teachings in the Bible, and they’d go to church and they’d hear things being preached which were not, not compatible with the understanding they were getting in their own hearts with what the stories in the Bible were really about. So there was this fracturing of people following the faith into different groups into different perspectives. And the protestant movement of course was part of that, Calvin was part of that.

So the Quakers— there was a real social restlessness about faith. A very strong belief in the reality of life after death, and if after death, you’ve lived a good life, you’d go to heaven and be with God. If you’d lived a bad life, you’d go to hell. The first quakers that wrestling with those ideas, studying the bible very closely, came to understand that a core principle is actually nonviolence. And its right through the old testament, as well as of course Jesus’ teachings. Story after story tell of the damage violence does, that way there is no future in it There is of course a short-term future in it, but in the end the thing that the most important thing is to lay down your sword , is to love peace, to be peaceful, with your neighbours, and with people who are different. And so the earliest Quakers’ first public statement—some of them were being imprisoned for blasphemy, were being beaten up on the street for being blasphemers, and were being thrown out of churches for speaking a different truth to what the preacher was giving. And their first public statement was the statement of the peace testimony: ”we utterly deny all wars and strife and fighting with outward weapons for any purpose whatsoever”. And they got that from the Bible! And so it’s the first principle of our community life. And struggling with the real challenges of trying to live that way. And the later testimonies which kind of became came clear over the next few decades, of the importance of simplicity, the absolute rightness of treating everybody equally. Of being scrupulously truthful. Because all of those things flow from God. They are, they are God’s work in us, they are God’s requirement of us, and there’s no escape from that. So, you know, peace is there right at the core.

Who are the Quaker Grannies for Peace?

Ah. Well there’s three of us, although one will be joining us in the next action we’re going to be involved in at Pine Gap. well, we are all women, at the moment, although inclusively I’m very happy to have men to call themselves quaker grannies for peace [laughs], or they can call themselves quaker grandpas for peace! I share the bonnet around, the 1890’s bonnet to anyone who cares to wear it, so in that sense we are an undefined or an ill-defined grouping. But the actual actions that we have taken, there are a few of us. Jo valentine, who of course was a senator for many years for the nuclear disarmament party and who is very active in the Greens, and a longstanding peace activist. Dawn Joyce in Brisbane, who is a longstanding peace activist too and longstanding Quaker, and myself. And yes, we feel very supported by our Friends, the Quakers of course. 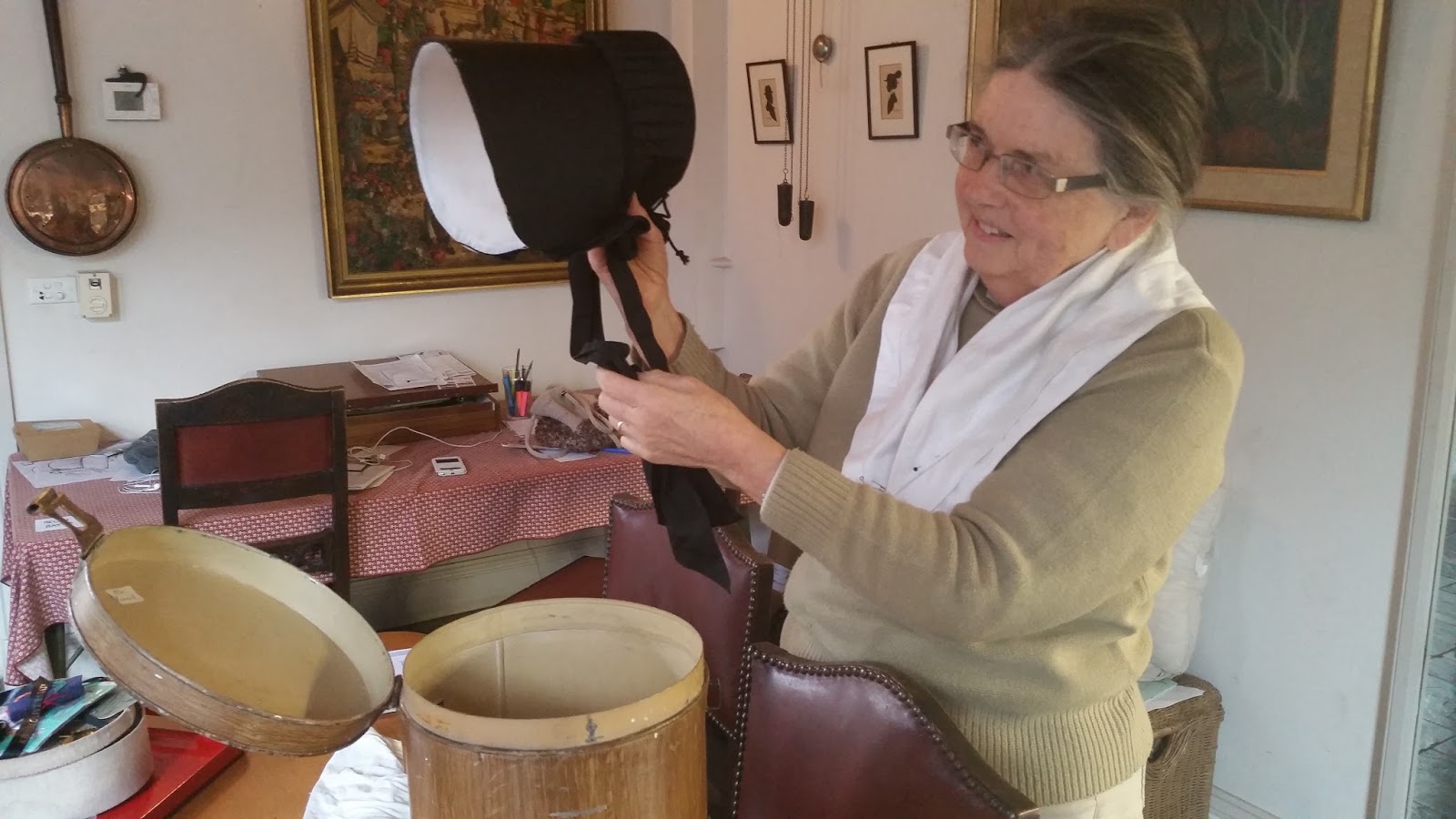 Helen Bayes, in her Melbourne home, showing her vintage 1890’s Quaker bonnet, which she wears today during their action at Pine Gap. Photo: Lucy Allan