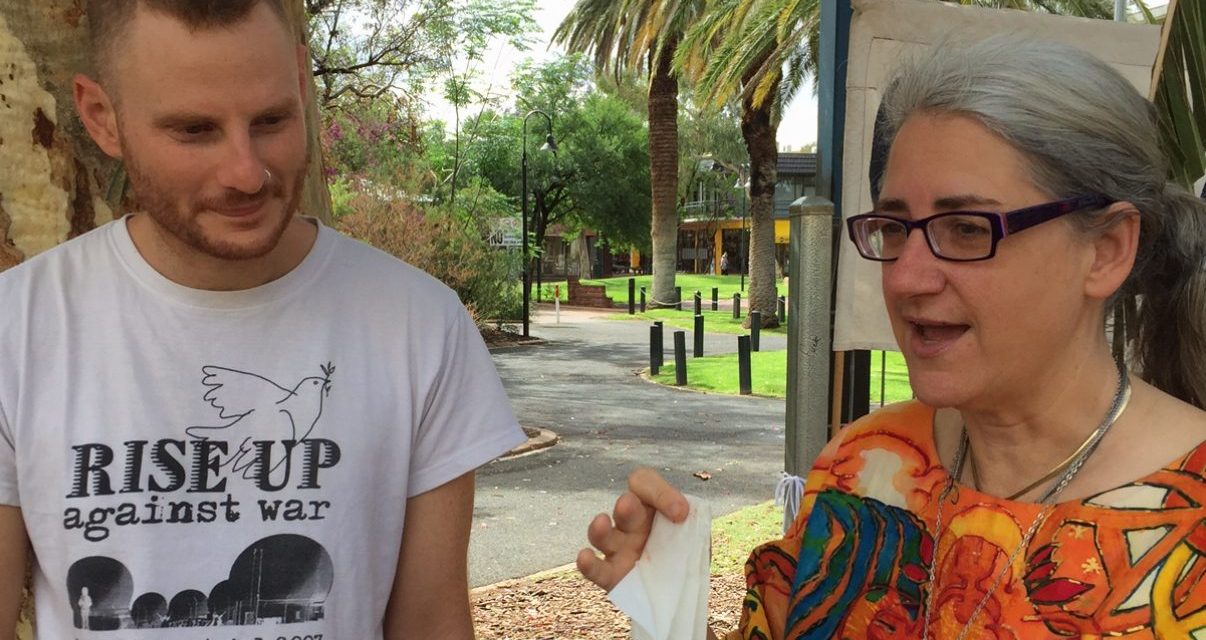 Day two of court for the five Pine Gap peace pilgrims, and the end of a long week during which we have all become very familiar faces to the friendly staff of the Alice Springs Supreme Court.

The day was sadly lacking in much courtroom drama, taken up as it was by prosecution witnesses – all of whom were police recounting in excruciating detail the events of the early morning of September 29, 2016.

The first witness, head of the Federal Police at the base, was another veteran of the epic three week trial of the four Pine Gap citizen’s inspectors in 2007. Some good reminiscences were exchanged during cross-examination.

Our efforts at shedding light on Pine Gap and its operations in cross-examination of witnesses didn’t come to much, though we had fun at times. Like when, after repeated accounts of how dangerously rocky and steep the terrain was, Margaret asked one of the cops whether she looked like the kind of person who could climb Everest after four hours hiking through the dark and no sleep. Or when we asked another to explain in layman’s terms what the police wrestling move “arm bar take down” looks like. Best call of the day though came from Jim. On being told we would have to return the dvds of CCTV footage because of national security reasons, Jim said “I’ll have to contact Vladimir Putin to get back the copy I lent him”. Even got a smile from the prosecution.

The final evidence of the day was the video records of interview. At this point the serious pretensions of the court faded into farce as we were presented with audio and vision that didn’t line up; adding a surreal edge to otherwise remarkably dull footage of us wrapped in blankets in the watch house, having our rights read to us for five minutes before refusing an interview.

The exception was Margaret, who despite exhaustion gave a very spirited interview about going to the mountain to witness this hidden place which is the cause of so much death; about breaking the denial most of Australia live in most of the time when it comes to this US base in the middle of our country.

That was the end of court for another day – probably not the most eventful day the Supreme Court has had. But the peace pilgrims were not the biggest story in Northern Territory justice today – that was the release of the royal commission into youth detention, a report that called for the controversial Don Dale prison to be closed. After finishing in the afternoon we headed up the road to the Magistrates Court, where a rally was being held against youth detention.

There are some similarities between the two cases – in the name of responding to anti-social behaviour the state has developed an immense system of institutional violence that can justify torturing kids. In the case of Pine Gap, the claim is that to combat terrorism requires a never ending war that has hardly stopped terrorist attacks but has killed hundreds of thousands of people and forces many more into a state of permanent fear of the unmanned drones hovering above their heads. Or an extraordinary surveillance system that monitors the online activities of everybody in the world; seeing us all as potential suspects and enemies.

In this context, what Margaret spoke about in her interview was so prescient – the need to open our eyes to the violence perpetrated in our own names – to confront it face to face, to lament and commit to a new and better way.

There are a couple of events planned over the weekend and the chance to hear on Sunday from some experts on Pine Gap. It will be nice to have a break from court, though the park next door will be a less fun place without our eclectic bunch of humans and dogs, banners and peace poppies. Court will resume on Monday, when the prosecution will presumably finish giving their evidence and we will hopefully begin giving ours.