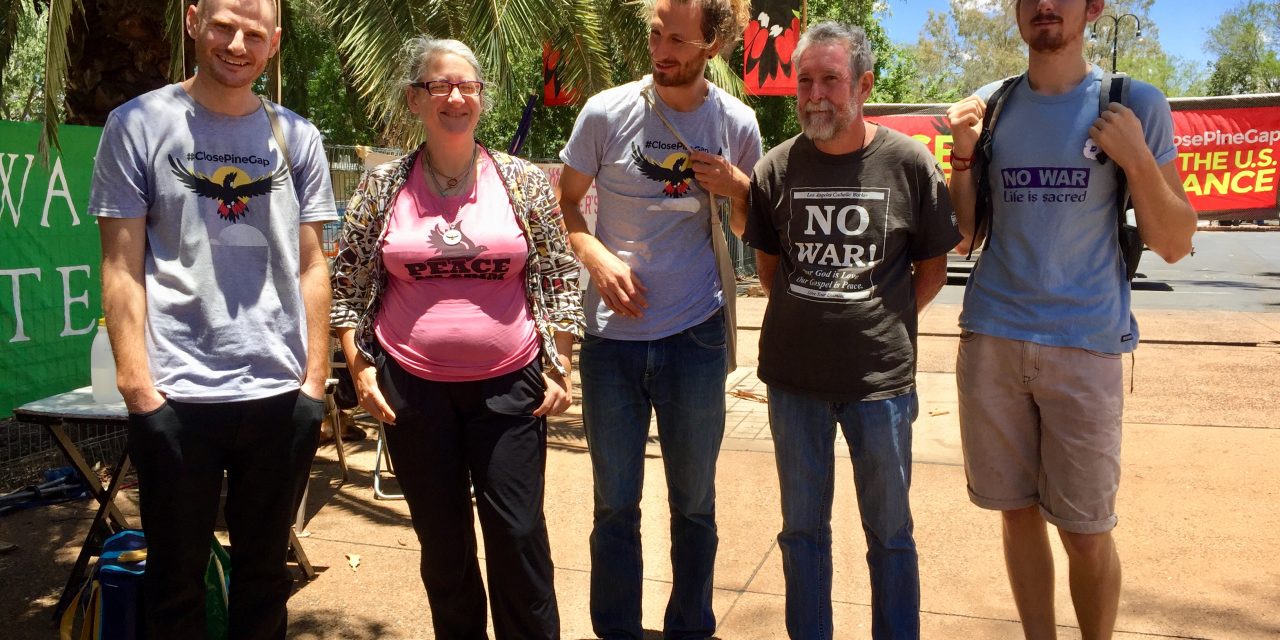 Day four in the Alice Springs supreme court for the five peace pilgrims charged with trespassing on Pine Gap. And this one was really our most important day so far as we finally got to give our testimony. Again we stopped for prayers outside the court. The bible passage I was reminded of was Matthew 10 as Jesus sends out the disciples. He tells them “when they arrest you and put you before the courts, do not worry about what to say or how to say it. At that time you will be given what to say, for the Holy Spirit will speak through you.” Not to say we hadn’t put in preparatory work, but we were definitely counting on some spiritual help!

First Margaret continued her statement, and then she faced down cross-examination from the prosecutor Mr McHugh. We got a sample of what the questioning would be like – trying to beat our defence by saying we had no ability to actually disrupt operations at Pine Gap. Margaret refused to be pinned down though and stuck stoically to the point that non-violent direct action always means resistance by the mere fact of your presence. Eventually Mr McHugh was forced to admit defeat and give up.

Which meant it was time for the next witness – that was me. I gave a detailed account of the US drone program and the reasons I believed it needed to be disrupted; from learning about the role of Pine Gap and signals intelligence in identifying targets, to the legal questions about extra-judicial assassinations, the dehumanization of enemies that drone warfare facilitates, and hearing the voices of drone whistleblowers victims. I also spoke about my sincere belief that social movements can bring about great social change, and the power of a small group of ordinary people taking a public stand against violence. I was grateful that Mr McHugh’s cross-examination questions gave me a chance to further elaborate on this last point.

That brought Franz up to the stand. He spoke about the importance of music in his life and in creating change; and recounted the story of our incursion into Pine Gap. Just as he got to the climactic point it all got too much and he broke down in tears. Take that, prosecution who keep objecting to evidence on the grounds it’s emotive! Franz blamed tiredness after a very busy and nerve-wracking week, but he was rescued in any event by the lunch break which gave him time to recompose himself. When we got back, Franz showed the court a clip from the Tonje Hessen Schei documentary Drone; a powerful film which had been shown in Alice a few days before our lament last year.

Tim got up next. He is a man of many talents, but I don’t think it’s unfair to say he is not the most confident public speaker. Still, he gave a good account of his lifestyle and reasons for resistance; as well as relating the story of how his cousin Sam along with two friends walked onto a spy base similar to Pine Gap at Waihopai, New Zealand. They sliced with a sickle the weather dome that covered one of the satellite dishes, and were subsequently found not guilty by a jury who ruled they were acting legally to defend others. Hint hint 😉

With the afternoon creeping by, we called our second witness Richard Tanter. Richard is the foremost scholarly expert on Pine Gap, and he gave a characteristically detailed account of what the base does and its role in the US drone program. Mr McHugh had objected to Professor Tanter’s appearance on the grounds that the evidence could be emotive – he’s obviously never read those Nautilus Institute papers! It was great having Richard there talking about this subject he has done so much to shed light on over the years. Even beyond his evidence, so much of what we were able to say in court was indebted to the tireless and invaluable work of Richard and the late Des Ball.

There was still time for our final testimony from Jim. He had a bit of a struggle getting some of the evidence he tendered accepted; but like a lot of us who are more comfortable in conversation than as orators, he really came to life when being cross-examined. Highlights included when he was asked whether he had considered other options like taking legal action against the government. Jim answered “I once did a citizen’s arrest of Peter Dutton for his war crimes”.
“How did that go?”
“I think he was embarrassed, but mostly he went unpunished”.

Perhaps unwisely, Mr McHugh pressed on. At one point the questions turned to the constitutionally enshrined separation of powers. Jim replied he felt the concept was a bit of a myth, and gave as an example the fact that the last time he was charged under the act that presently finds us in court, he had his conviction overturned then watched the government change the law to stop the court from doing that again.

Before the close of the day, the jury was sent out for the beginnings of the discussion of whether our defence will be accepted as valid. That conversation will continue tomorrow, but as for today I was so proud of all my co-accused and how they spoke in the court.

Last week we gathered with some Alice Springs locals to discuss the transformative power of lament. The conversation was heavily influenced by theologian Walter Brueggemann. A quote from him was used then, and I thought of it again today. Walter says the task of the prophetic voice is to “unveil truth in the face of ideology; to voice grief in the face of denial; and to proclaim hope as a counter to despair.”