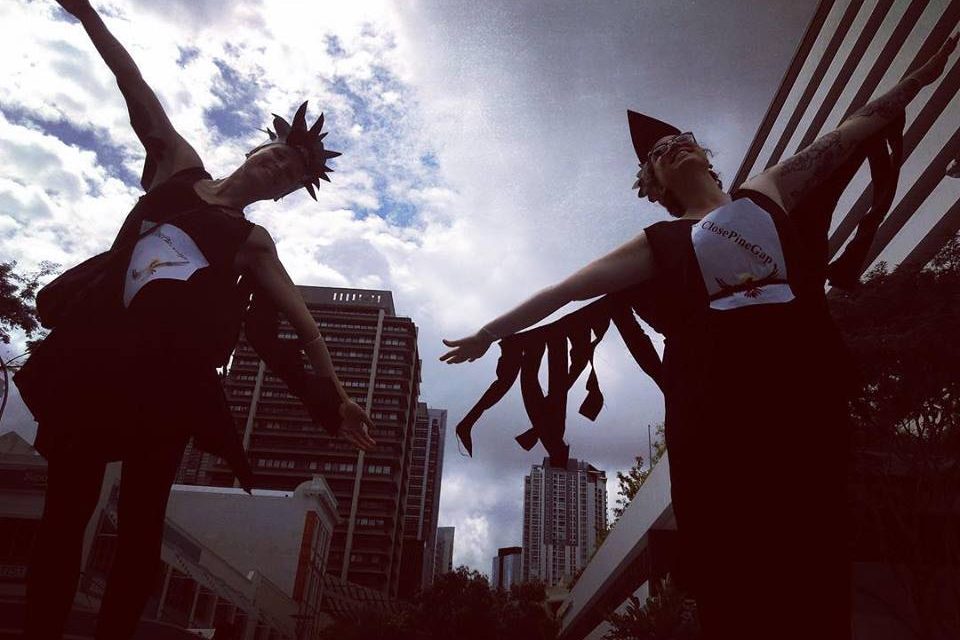 Day five in court for the Pine Gap peace pilgrims. It was a tired morning after a big night of preparing legal arguments and joining a local bible study at the gates of Pine Gap itself; but once again we put on our assortment of anti-war t-shirts (except for Franz, who donned a fancy paisley number for the occasion) and headed back to the court.

Yesterday we had said goodbye to a few of the friends and supporters who had come from across the country to Alice Springs for the trial. Unfortunately the trial seems to have outlasted people’s schedules! Today we said goodbye to a few more. But we got a boost of solidarity from Brisbane, where birdwatchers reported sightings of a flock of black cockatoos roaming the city handing out flyers about Pine Gap!

Having completed our evidence yesterday afternoon, this morning opened with the court voir dire (that means without the jury – you learn all kinds of legal jargon doing this stuff) while we debated whether our defences would be allowed for consideration by the jury. Basically, the way it works is this: pleading not guilty in court, you can either claim you didn’t break the law; or that you did but had a legal reason to do so – eg in response to a sudden extraordinary emergency or in defence of others. This is what we were going for.

The morning started slowly as the prosecution argued why our defences should not be allowed using lots of case law precedents from Australia and the UK. My personal highlight of this less than thrilling episode was when the precedent was raised of Dave Burgess and Will Saunders painting “NO WAR” on the Opera House in the first week of the Iraq war in 2003. The judge back then ruled against them and actually gave a prison sentence; which is why they were mentioned today by the prosecution. But in any circumstances, it is an honour to be compared to such an iconic action.

With two barristers, three solicitors and the commonwealth public interest specialist up against five anarchist peace activists; the odds were stacked against us when it came time for the legal stoush. But the ability of a small but determined group of people should never be underestimated, and so it was that Margaret presented everyone with a masterpiece in the art of lay law. Margaret has grown more exhausted, stressed and sick as the trial has progressed, and at this point can hardly speak due to a sore throat. Yet this morning she stood up and with supernatural power was arguing case law examples, legal elements and subsections, taking on each point of the prosecution argument. It was magnificent, a kind of performance that rarely is summoned in the day-to-day life of a mum, social worker and activist. As a final dramatic flourish, she emphatically folded her notes and sliced open her thumb with a papercut. But seriously, she was amazing.

Justice Reeves retired to consider his decision while we retired to the park for lunch. When he returned, it was to announce the disappointing but not entirely unexpected news that he would not allow our defence.

And so the jury was led back in for the closing addresses. The prosecution’s was a plain restating of the facts in Mr McHugh’s very dry, one-hand-in-the-pocket, gesticulate-with-glasses manner we are by now so familiar with.

Ours’ were much shorter, as you would expect given we had just been told all our evidence was effectively invalid. In our own way we each appealed to the consciences of the jury; telling them to evaluate the facts and take the action they felt necessary, the same as we had. Margaret finished with a quote from the closing statement her late husband Bryan Law had given in court a decade ago after similarly trespassing on Pine Gap.

Tomorrow the jury will receive their final instructions then make their decision. If it is guilty, we could face sentencing in the afternoon. So if there’s no court blog tomorrow, you can probably hazard a guess as to why. But you can be sure that none of us regret taking the action that we did for peace, or regret representing ourselves in court. It has enabled us to present ourselves to the court, the Pine Gap staff, the jury and the world as we are – a group of five friends with nothing to hide, who in our words and deeds hope to point the way to a world of new possibilities.

Whether we wind up in the clink or not, that struggle for a better world will go on in our hearts, our relationships, and how we respond to injustices on a systemic scale. Sometimes the struggle involves lament, sometimes celebration. Sometimes it is mundane, sometimes dramatic.

That last sentence is also a good description of court; but the jury, after five days of experiencing both those extremes and plenty in between, tomorrow will have to work out between them whether we are guilty or not.