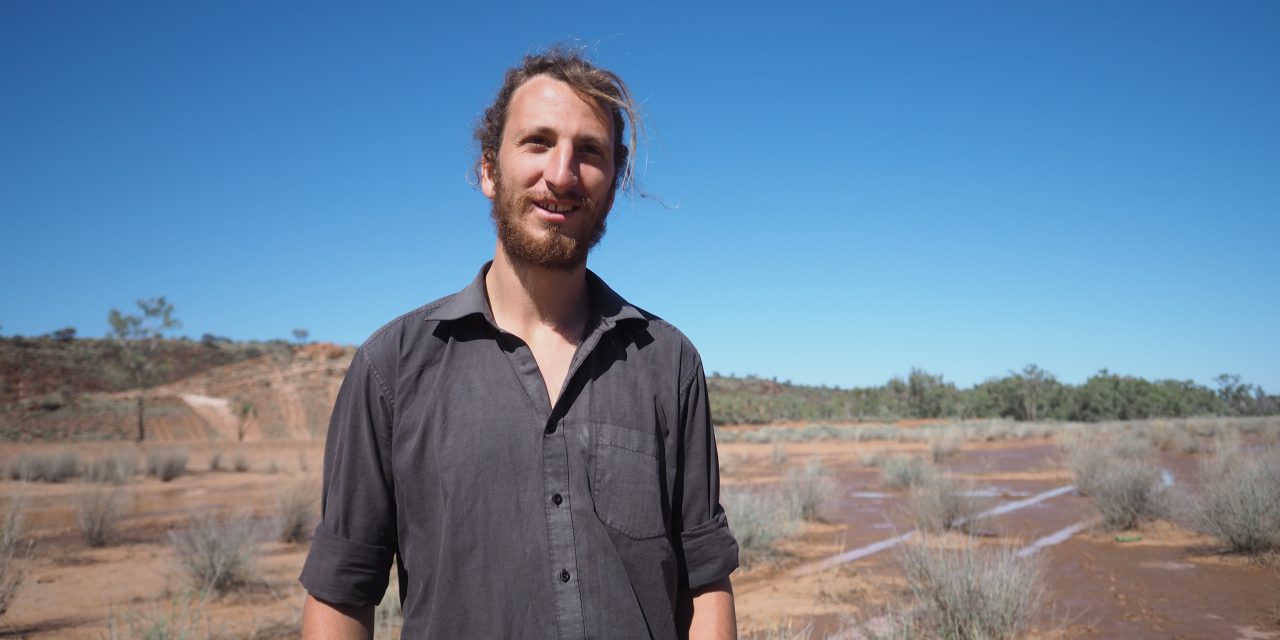 I heard rumours about another Pine Gap action a few years ago at various peace gatherings. There was talk of meeting up in Alice Springs at Pine Gap again, and so I thought if I’m in the country, I’ll go along. I am good friends with Jim Dowling and a few years later, he asked me if I was coming. I said ‘yeah sure’.

We don’t know a lot about Pine Gap. There is not much in the way of proof that confirms what we believe, which is that it’s an intelligence gathering institution, for all sorts of intelligence that aid assassinations and killings overseas. Using common sense, and putting a few things together, it looks fairly obvious really in some ways, being out in the middle of nowhere but highly secure.

I think it’s the only place in Australia you’re not allowed to fly over. Obviously something important is happening here and the military/ government would rather the large majority of the public didn’t know about it. It’s a joint defence facility, which confirms that it’s military and it also confirms the partnership with the United States. That is enough for me. I’m anti military, so that was enough for me act.

I don’t know if it was any particular war that made me anti-military. It’s just the stories that you hear of all wars, things that are common in all wars. It’s the absurdity of the cycle of violence. If you have differences with someone, killing them is possibly the least intelligent thing you can do in terms of solving the problem. It doesn’t get rid of the problem, it just increases it. People then are angry and want to kill you, and it escalates.

History shows us this as well, so it wasn’t any particular war it was just the facts that history lays out. People who come home from war are pretty broken people. Anyone can see that. I’ve come into contact with veterans, but I don’t know them very well. Not many veterans talk about their experiences for various reasons. ie: Fear of being misunderstood, shame, guilt, trauma etc. I think they feel that they have to stick together because nobody else truly understands what they’ve been through. So if you don’t know a veteran personally then you’re less likely to have these first hand accounts. I’ve heard some of them talk about their experiences and it sounds pretty horrific.

Lament for me means to mourn and to acknowledge suffering, and to not just ignore it and pretend it didn’t happen. Lamenting is not a solution in the physical world but by lamenting you are saying to the people still alive, this is wrong, what happens here is wrong and we are acknowledging that. I also believe you are saying to the people who are dead that they are released. You are letting them go. To me the power in going somewhere to lament, is sending a message both to the living and to the dead. I feel like if there is no lamenting, then that release can’t happen.

It’s mainly for the living, including those who are prosecuting us. Let the dead rest, it’s the living who keep stuffing things up, the dead aren’t around to tell us not to make the same mistakes again and again. To the prosecutors I have one message about Pine Gap: what has happened and is continuing to happen here is wrong.

I grew up in the far north of New Zealand and I spent half my life in a rural area and half my life going to school in Auckland. My family are all Catholic. I grew up Catholic and with that as the source of my non-violent belief, my belief in a non-violent Jesus. All his teachings make it pretty clear to me that if we can stay away from violence the world would be a better place. Where I grew up there are a few relatives who have done similar things, they have become politically involved in similar struggles for peace.

I was a teenager when one of my cousins was arrested for something like this and it just made so much sense to me. In the context of going to school with lots of teenage boys who come across quite trigger happy, with video games. They have a totally unrealistic view of the world and of war. When my cousin did non-violent peaceful civil disobedience and was on the news, it was particularly relevant for me just because I was surrounded by all these other boys who had this mindset. Nobody understood, it’s a shame, but nobody understood. It was quite disheartening, it makes you want to not take action or stir the pot because no one will understand. But I hope those boys, who are now adults might look back on that and get their minds thinking.

When we were in the cells it was hard to know what was going to happen. I didn’t know what to expect. When I stood in the courtroom, it was less than 30 seconds before I was made aware that it was an interesting law where you had to get permission from the Attorney General to charge someone with it. The case was dropped. That was surprising. That took a while to register, that we were being let off. When it did register, it was a pleasant feeling, especially with everybody out side the court house supporting us, but I never fully believed that it would be over then.

Just talking with the others, it all seemed pretty likely that at one time or another, they would catch up with us eventually . It seemed like they had made a big enough deal about it already, they weren’t going to just let it go like that. I did this action for myself. When you are in something like this, you are constantly being made aware that there is war and injustice. I don’t know whether you need a case on your hands to do this, but it helps keep you think about what is happening all over the world thanks to Pine Gap.

I hope for as much media coverage as possible to share the story and information. The media isn’t all that good, even when something massive happens, it might last for a few days, most people forget in a week. That might be the best we can hope for. Even that would be an achievement.

There is a vain hope that the court proceedings might bring about a change in legislation, it’s always a possibility. I don’t know, there could be all kinds of change, to protesting rights to laws about the actual defense facility itself. That’s a hope for a positive change, but I guess it’s far more likely that if there was going to be a change it will be for the worse. If that happens then we’ll just protest that too.