Renaming the Road to Pine Gap 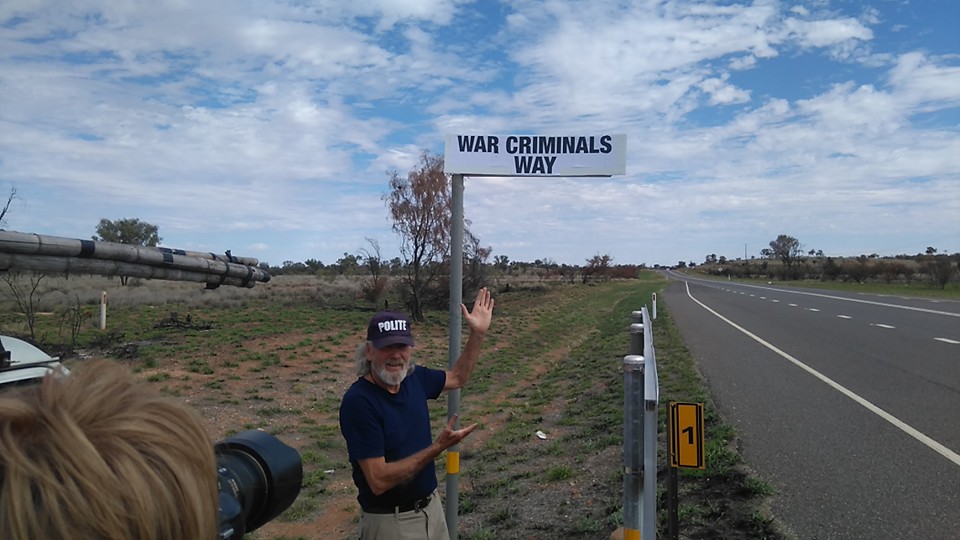 Long time peace activist, Graeme Dunstan of Peacebus.com, is in Alice Springs to prepare for the Alice Springs Peace Convergence 19 September to 2 October.

Alice Springs folk will have seen his vehicle driving about with its distinctive Redtail Black Cockatoo mural proclaiming #ClosePineGap.

The Alice Springs Peace Convergence will be a program of events includes a national conference and a public forum, protests, exhibitions, and performances all aimed at raising awareness and dissent in regard to the role of the top secret US satellite signal, spy and drone base at Pine Gap.

“Joint Defence Facility Pine Gap is secretly celebrating 50 years of occupation of Arrernte land, 50 years of using Australian soil to conduct US foreign wars and it is the job of peace activists is to crack the nut of denial around its existence and its murderous role,” Mr Dunstan said.

“Alice Springs serves as a residence for as many as 500 US spies, their support technicians and their families. War crimes, such as the targeting of drones against innocents in far away countries such as Afghanistan, Iraq, Syria, Yemen and Somalia, are being committed on a daily basis by these polite but murderous US citizens in our midst.”

“But know one talks about it.  No one talks about the war these spies make while guests in the land. No one talks either about how their war making makes Alice Springs a strategic target in the event of nuclear exchange, especially as tensions between the US and China heighten.”

For starters Mr Dunstan intends to set up a display of banners in Hatt Road, the road to Pine Gap, to let the commuting US spies know that they are being watched

He also proposes to rename Hatt Road for the duration of the Alice Springs Peace Convergence and possibly longer.

The new name will be War Criminals Way.