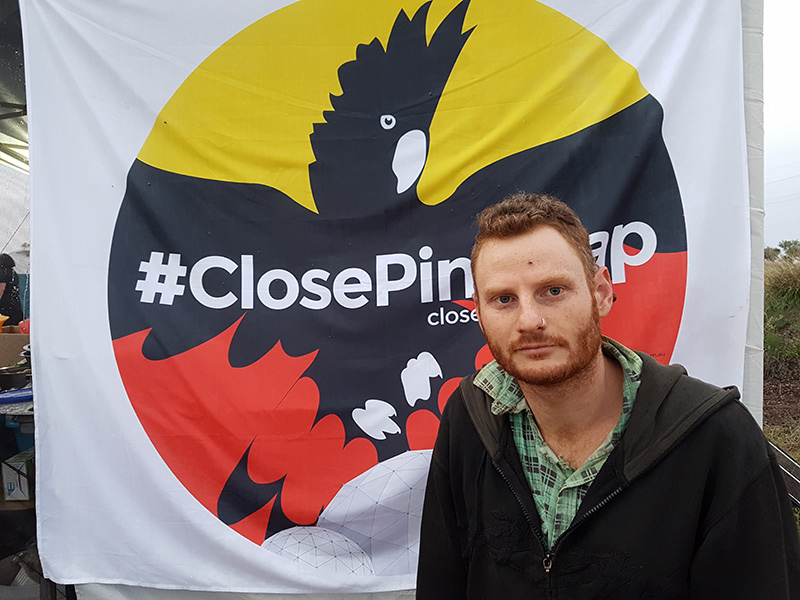 I  grew up in Mudgee in central west NSW. Even at school I was always interested in ideas of social justice, but in a small town it’s quite difficult to live that out. I moved to Sydney after finishing high school and I got into Christianity and channelled a lot of my interest in politics into that. I was in a Pentecostal church in Sydney and ended up studying theology. I began to see a key part of Christianity being about the creation of a better world. I ended up travelling around Australia doing all kids of things. I stopped working and lived with no money at all; and would travel and work for free, living off the excesses of society. I did forest campaigns, anti-war and climate work, I mostly lived in cities in abandoned houses and from supermarket dumpsters.

It’s not hard to find the linkage between the life of Christ and social justice in the bible. Part of my realisation was that Christianity was something you could actually live out and follow.  The image of the first Christians is of a community of people who shared all their possessions and gave to all in need. Jesus’ teachings are not a religious theory, it’s not a complex logic of sins and atonement.  The gospels are instructions about how to live, and you can live out the teachings of Jesus who said blessed are the poor and turning the other cheek.  He used political figures and social elites as examples in his stories.

I first found out about the 2016 actions at Pine Gap from an IPAN conference in Canberra where they were planning to go out there to mark the anniversary of the Pine Gap lease being signed. Some friends and I thought we should join and do something.  I’ve always thought the US presence in Australia as one of the things about militarism we most need to highlight and this was an excellent way.  I knew Jim, Bryan, Adele and Donna who had done the previous action at Pine Gap which I thought was really inspiring, so I started planning to go.

I went out to Alice Springs not intending to participate in the lament action. I had planned for another action with a very powerful visual image. My plan was to lock myself to something to directly stop workers entering into Pine Gap. The day before we walked on, I actually did attempt to lock myself to a bus of workers at the front of Pine Gap, but unfortunately police dived in and grabbed me. I had been in contact with people the whole time planning the lament action, and I felt walking on was a really powerful symbolic action, so I decided to join. I was aware that the penalties are harsh, but the companionship of friends and the symbolism of the action made me feel it was worthwhile. The penalties may be harsh, but they are also untested. The last action did not result in jail sentences.

I hadn’t slept very much before the action. There was a lot of nerves. I was running on adrenalin. It was good to be with friends, two of the people were my housemates, and the other two I have known for a long time and have been arrested with them both before.  To be with friends and to do this action we all really believed in was inspiring.  We knew what the potential costs were, but one of the things in our favour was being with great friends who will support each other.

I’ve done a few of these pilgrimage actions and I like the contemplative nature of it.  You walk and think in quite a spiritual exercise.  We walked in silence most of the time through the desert sky and landscape; it was quite beautiful.  We needed to help each other as we were all quite tired.  As we were going up hills, Margaret was holding onto my arm to get up the steep climb.  The companionship was a big part of it.  I reflected on the role of Pine Gap as we walked, and the craziness of us insignificant people thinking that we can challenge a global empire, a military empire.  I thought that 5 of us walking on doesn’t do much, but is a little symbol of ordinary people trying to resist a global empire.

I’ve known about Pine Gap for a long time.  I’ve studied what it does.  Seeing this super secret place right in front of you is an experience.  I had looked at it earlier from another ridge, you can see it from various places, but during that action, I didn’t get to look at it very closely.  Because I was the person with the camera, I was tackled by police to take the camera out of my hand. I was handcuffed and dragged by police to the top of the hill where I saw Pine Gap.  All the others had been completely left alone and peacefully arrested.  I was tackled, not roughed up, the police were mostly civil.  Having walked all night to see it, there we were, we got to the front gate of this place that is so secretive, it’s almost mythological in what it does.  It spies on the whole world, we don’t really understand what it does and how the US keeps tracks on the world through this place in Australia.

In the NT the paddy wagons are uncovered cages which in the middle of the day means they don’t cook people to death, but it was freezing cold ride back in to town.  I guess I have been arrested a number of times and am familiar with police intimidation tactics, and I don’t pay much attention to them.  The police kept my camera, it was Margaret’s phone actually, which they kept as evidence.

The court was a bizarre experience. Those who saw the drama of the courtroom didn’t even get the full story. Once arrested, we were put in different cells, and only had a very short time together to talk tactics. We talked about what bail conditions and arguments we might use, but that’s all we talked about. Once we were in the holding cells at the court, we had the duty lawyer to inform us that the police would oppose bail, presumably because they didn’t have the Attorney General’s signature that they needed, they wanted to hold us until they did.  Because they had already told us that they wouldn’t be able to charge us at this time, we expected the case would be adjourned.  Then we were told they would oppose bail, which is unheard of, the presumption of bail is the same as the presumption of innocence.  So we had this quick talk about why we should get bail.

When it came time to call us up to court, instead of calling us all together, which would have allowed the more experienced people, Jim, Margaret and myself to speak to the judge, instead they called us one at a time, and the first peson called, the youngest and most inexperienced, Franz on his own. So then we had a mad panic, telling him, “this is what you have to argue, just say this!” We didn’t know what would happen, if he was refused bail he might be sent to the local jail.  Then he didn’t come back. The next called were me and Jim.  We had no idea what had happened to Franz, so it was a bit of a panic. We got in there and the judge said he was dismissing the charges, it was a bit surreal.

I wasn’t home when the summons came.  A lot of things had happened since the action, so I had almost forgotten about it, but I always expected that we would be charged.  When it came it was I suppose an inconvenience, but also an opportunity to continue to witness against Pine Gap and militarism.

For me Pine Gap is one of the key parts of the US world wide empire. They have these bases positioned around the world that allow them total access to everywhere in the world. It’s very strategic that Pine Gap is where it is because it gives the US satellite coverage of this hemisphere.  Even though most people in Australia don’t know about it, it is a key part of the US military infrastructure, and the US military has done a lot of damage. But it’s also about US domination, the empire, and Pine Gap allows this kind of coverage for spying on everything that goes on.

As Australians we have to take responsibility.  This is Australian soil being used for another country’s domination and imperialism.  So as an Australian I think it’s really important to take a stand against Pine Gap and to take responsibility for what happens from our soil. Once upon a time, Pine Gap was just used to spy on people which I don’t agree with but I suppose is a lesser evil.  These days the information gathered is used to target bombs and drones.  We want to cast a spot light on this place and to ask, “what does this place do and what is Australian soil being used for?” We want to put Pine Gap in the media spotlight, especially at a time when people are questioning Australia’s links to the US military and power under Trump.

I hope people see us as 5 friends who took symbolic action.  We walked onto a secret place unarmed, just with musical instruments.  I hope that this inspires a narrative about how to create change.  We are living in a very disillusioned time politically.  A lot of terrible things are happening in the world and people feel there is little they can do about it. I hope that the story of us, just 5 friends who decided that we should try to do something, is inspiring to others as they talk about how we can create change, ask questions and build a better world. 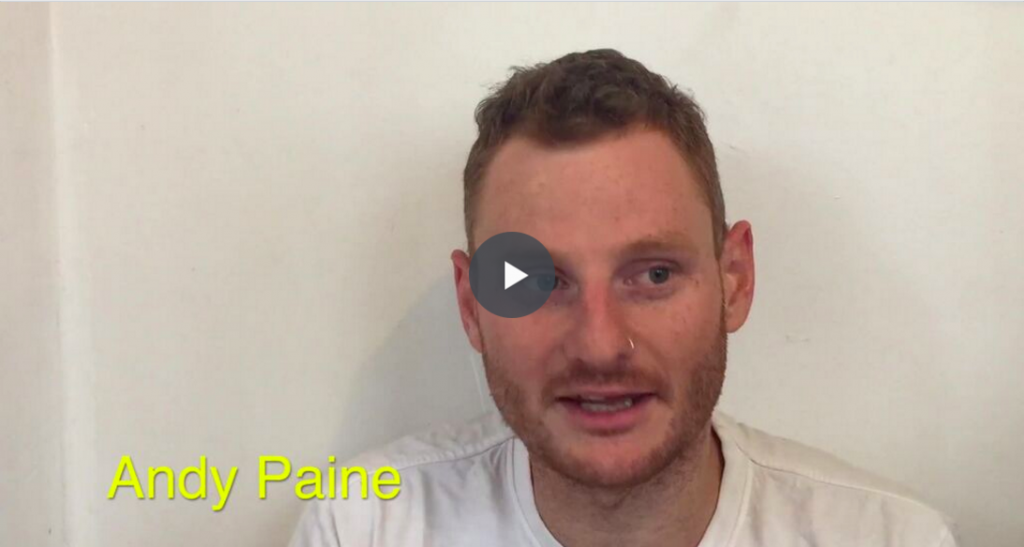