Pine Gap is located ~20km’s from Alice Springs in the Northern Territory. There are a few transport options being organised.

The Close Pine Gap organising collective in Melbourne is organising a bus with two drivers to transport people directly from Melbourne to Alice Springs for the CPG Camp in the last week of September. It’s a long ride but a fun one, with plenty of beautiful country to see along the way. It’s also the cheapest way to get to and from Alice Springs, with a return price of $250.

The bus will leave Melbourne on the 25th September, and return on the 3rd October. To secure your seat, book using the link here:https://www.trybooking.com/Booking/BookingEventSummary.aspx 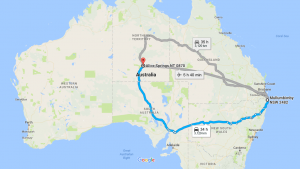 Peace Pilgrims in Cairns are travelling by road and may have seats available.

The vehicles leave on 16 September and will arrive in Alice on the 19th. We return around the 5th October…undetermined

If you are travelling from elsewhere in Australia, the Close Pine Gap collective in Melbourne have also offered to help organise carpooling and connect people up. Drop them a line at closepinegap@gmail.com.

There is a facebook group to organise  travel arrangements for the Closepinegap Healing & Unity Camps: https://www.facebook.com/groups/2090597434498256/