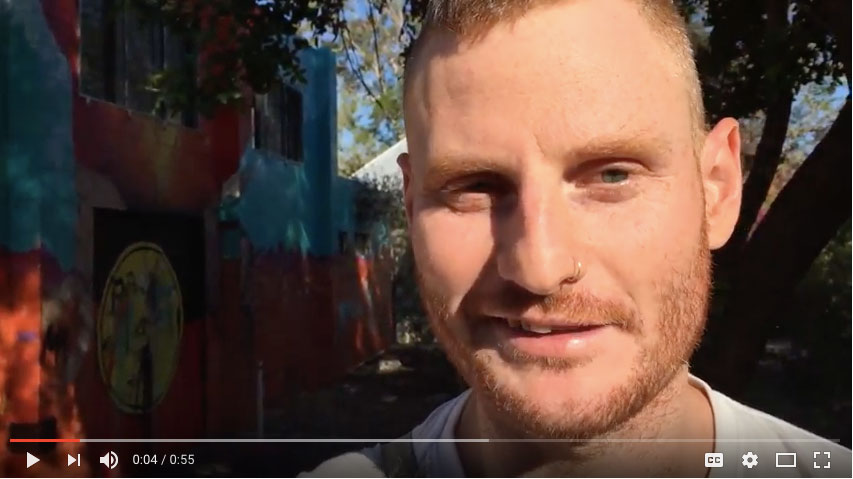 After three days in court supporting our friend Paul, this morning court began for the five peace pilgrims. Before entering, we did a procession through Alice Springs to the front of the court. Songs were sung, supportive messages from friends were read out, and a few short speeches given about the need to resist violence.

The morning was taken up empanelling the jury, so it wasn’t until after lunch that court proceedings really began. There was a bit of debate about whether we would be able to give an opening statement outlining our defence that our actions were defending others. The prosecution opposed it, and the judge ruled against us.

The first crown witness was a Federal Police officer who talked about spotting us on Pine Gap’s CCTV camera. At this point the proceedings took a dramatic turn with the sudden appearance from the wings of Department Of Defence lawyer Tim Begbie. Like several of our pilgrims, Mr Begbie is a veteran of the 2007 case from the last civilian incursion into Pine Gap. He had come to argue that the CCTV footage should be shown only in front of a closed court, but first he had to argue that he (who is not the lawyer in this case) should be allowed to argue that.

He came with a lot of case law to back him up, but Justice Reeves wasn’t entirely convinced (he also seemed to be somewhat affronted by this sudden interloper giving him very strict advice about what he should rule) so he deferred it to be argued later, not in the presence of the jury. A trial within a trial if you like.

So stay tuned for that I guess. The comedic highlight of the day came in the affidavit from the Dept of Defence as to why the footage should not be viewed by the public. The affidavit says Pine Gap is vital to Australia’s security because it contributes to the goal of nuclear disarmament! It’s not clear whether that’s by gathering signals intelligence that would be used to target bombings by the US in the event of a nuclear war, or by the thermal imaging equipment that allows the US to ensure they maintain a bigger and more powerful arsenal than other countries; but apparently due to provisions in the National Security Act, Ms Skinner who wrote it won’t be required to come and face cross-examination on it.

One would think with all the intelligence floating around at Pine Gap, someone would have suggested that a good way to contribute to disarmament would be for either the Australian or US government to ratify this years United Nations resolution to ban nuclear weapons.

With all that business finally put aside for now, the jury and the witness returned. The defence asked him questions about the protests against Pine Gap last year and whether he could remember which functions of the base the hundreds of protesters had been opposed to. Unfortunately, his memory was a bit hazy on those details.

And that was it! Things move slowly in the Alice Springs Supreme Court, and not just because of the desert heat.

Meanwhile, thousands of km away in Canberra, Greens MLA Andrew Bartlett gave a wonderful speech in the federal senate about our court case, the role of Pine Gap in US wars, and the lack of accountability the base has to the Australian public. He tabled an open letter to his fellow senator and Attorney-General George Brandis signed by over 70 prominent Australians and now over 600 people overall; saying the charges under the Defence (Special Undertakings) Act should be dropped to protect the right of peaceful protest. You can add your name to the letter here

As for us, we’ll be back in court at 10am tomorrow, continuing to try to put Pine Gap on trial. Thanks everyone for your many messages of support (sorry I’ve been too busy to reply to them all!), we definitely appreciate them and carry you all with us into the cold environs of the court. I’ll be back with another update tomorrow.