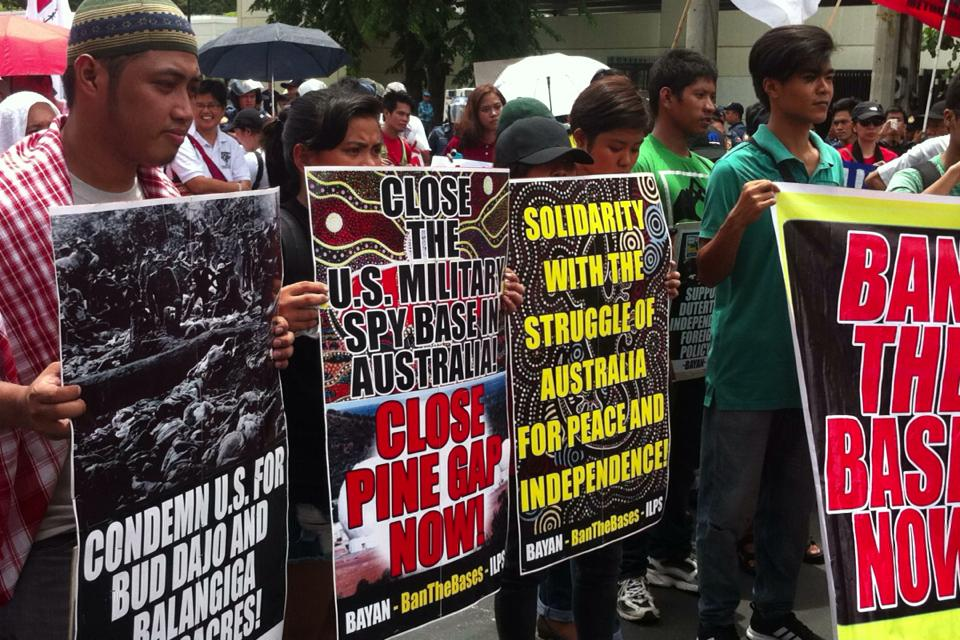 On the 25th year of the Filipino people’s rejection of a new United States Bases Treaty with the Philippines, demonstrators led by BAYAN (New Patriotic Alliance) held a protest action near the US Embassy to call for the abrogation of all military treaties and agreements that perpetuate US neo-colonial rule over the Philippines.

Aside from expressing support to the new Philippine President Rodrigo Duterte’s stand for an independent foreign policy, the demonstrators also aired their support for Australians’ efforts to close the Pine Gap Joint Facility and remove US marines from Darwin.

Ordained Uniting Church minister from Victoria and officer of the Philippines Australia Solidarity Association (PASA) Rev Berlin Guerrero commends this show of solidarity in the fight for people’s rights for freedom and independence in the region.

“The so-called Asia-Pacific Pivot with US military bases encircling China by strengthening its bases in South Korea, Japan, Guam, down to Darwin in Australia, together with joint war exercises and joint military sea patrols alert us to the risk of an incident which could spark an all-out war“, said Rev Guerrero.

In 2007, the then-United Church of Christ in the Philippines (UCCP) pastor was abducted by men from the Philippine naval intelligence security group while on the way to a memorial service of an activist friend who was assassinated in 2006. Guerrero was among hundreds who were tortured and jailed under the Arroyo regime based on trumped up charges.

Heavily involved in social justice activities in the Philippines, Guerrero had always stood against US colonial rule and the servitude of past Philippine governments to US interests in the region making the whole country practically a military base through the US-RP Visiting Forces Agreement and the Enhanced Defense Cooperation Agreement.

“I look forward to a future where all countries in our region of the world are exercising mutual respect and independence,” Rev Guerrero said.

“It is important to build solidarity among freedom-loving people in Australia, Philippines and the whole region. The pursuit of an independent foreign policy in the Philippines is a welcome development which I hope will contribute to a freer and peaceful region,” he said.

Guerrero will speak from a faith perspective at the Independent and Peaceful Australia Conference in Alice Springs on Saturday  1st October. The Conference seeks to highlight the role Pine Gap    plays in US military activity and calls for its closure. Other speakers at the Conference will include Professor Lisa Natividad from Guam and Professor Kosuzu Abe from Okinawa, Japan.